Four years ago, April 2015, we were in the final stretch of our time living in Milwaukee, Wisconsin. After a long year lived far away from our families, which neither my husband nor I had ever done up until that point, it was almost time to pull the boxes we had saved from our move a year ago out of the detached garage of our apartment. To say I was excited was an understatement. I was counting down the literal days to the day when I could “reasonably” start packing for our trip home. In my defense, I think I was probably nesting just as much as I was preparing to head home. I had dreamed and planned my second baby in Wisconsin, but my plans included him being born in Colorado.

It had been a bit of a wilderness season for us out there, beautiful as it was and as many new friends and new adventures as we were privileged to enjoy on those strange shores of lake Michigan. In May of 2014, Willy drove a truck loaded to the gills with all our worldly possessions, and I, who had made my own parents grandparents only eight months before, said goodbye to them at the curbside of the airport, and held my own tiny daughter in my arms on a one-way flight to a place I’d never been.

Wisconsin was a season of waiting in the wilderness. We had been told right from the outset that the assignment would last a year, and though we felt this to be a blessing in so many aspects, it also felt like a curse. It would be hard to choose to get attached to people and to a place that we would certainly be leaving. And in turn, I found that people were hesitant to get attached to me in turn. That waiting place, like most waiting places, was extraordinarily lonely.

May 2015 my husband’s work informed us that they needed us to extended our time in Milwaukee by a month. And though 30 days was far from long in that grand scheme of our time there, that extra month that I had to wait to start packing felt like an eternity.

But there was one fear I held onto while I filled those boxes and taped and labeled them for our longed for journey home. What if they don’t recognize me?

I was 30 weeks pregnant with our second child when we finally made our journey home. I remember the heat of our new rental house on that July day; the stale air of a house that had been sitting empty, to me smelled like the sweet aroma of a longing fulfilled. But it wasn’t the growth of my belly that made me fear the lack of recognition by my family and friends; it was something much deeper than that. I was different now.

The wilderness had changed me.

That year was a stretching time. That summer, removed from every support system, like scaffolding, we wondered if we could stand on our own two feet. Now, when I look back on that time, though I still feel the ache of that deep loneliness I experienced there, I also see roots of strong relationship between my husband and I. When the last piece of scaffolding fell, and the last apron string was cut, we held on to each other, and to the God who had brought us to the wilderness for a reason.

As a people pleaser in a season with very few people to please, God revealed to me that my longing to be useful and needed, had the potential underbelly of inflating my ego. My longing for connection, though good, revealed my unbelief in the sufficiency of God and His presence with me in all circumstances. It was there that I battled idols of entertainment, which made my hollow life feel less lonely, but which were steadily whittling away the time which God had purposes and intentions for, if only for a year.

My definition of a full life changed dramatically that year. When we had once had friends for dinner almost every night of the week, for months there was nothing. By the end of our time there, I was overjoyed to have one playdate every other week, and I deeply enjoyed the one night a week when we were privileged to host our neighbor for dinner.

Our waiting changed us. That time created in us a pure desire to not only be apart of community, but to help create it. That time cemented us in our marriage in ways that would not have happened otherwise. That time revealed to me the idols in my heart that desperately needed to be dethroned. And it was there again, and the desk in my living room, that I finally began writing again. The Lord began to stir passions in my heart, many of which I couldn’t yet name.

All this and so much more. And I wouldn’t trade that wilderness for anything; not because it was easy, but because it was just another step on my journey to becoming the woman that God has always planned for me to be. I’ve seen glimpses of her in a window pane sometimes, just a sideways glance, nothing more. She’s beautiful and fearless. She loves fiercely with bold affection. She speaks words of truth and is always ready to hold out a hand in forgiveness and in grace. She knows that her life is not her own, and she’s okay with that. She trusts in the sufficiency of Jesus in the midst of all circumstances, and she helps others do the same.

I want to be her. I want that more than anything.

2 thoughts on “Waiting in the Wilderness” 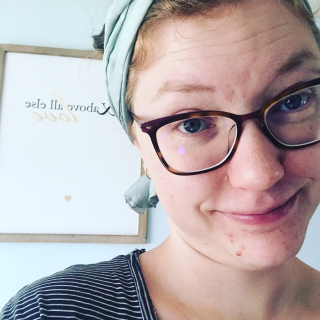